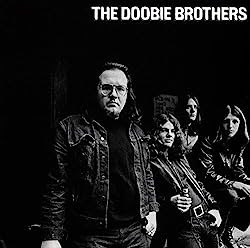 . He wanted to join a Moby Grape reunion that never happened.

Spence introduced Hartman to singer, guitarist and songwriter Tom Johnston and the two proceeded to form the nucleus of what would become The Doobie Brothers

. They called that early incarnation "Pud," and had a number of lineups and styles. As a "power trio" with bassist Greg Murphy and later with a horn section, they gigged around San Jose. In 1970 they teamed up with bass player Dave Shogren and singer, guitarist and songwriter Patrick Simmons.

Johnston has said that the Doobie Brothers name can be credited to a friend who thought it served the band's fondness for "doobies" - a slang for marijuana cigarettes.

Since this site is more about name etymologies (and not really a music site), let's take a look at the doobie connection. 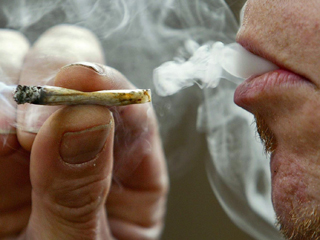 Marijuana has a good number of nicknames. Joints is a common one. "Spliffs" is another that refers to cigarettes rolled with a bit of cardboard or rolled business card in one end to serve as a mouthpiece. These are also known as a "crutch" or "roach." In North America, "roach" usually means the smoked-down butt of a joint.

Where did "joint" as a marijuana cigarette come from?  Ultimately, it's from French where it is an adjective meaning "joined" (past participle of the verb joindre). And that comes from Latin iunctus, the past participle of iungo meaning "I join."

You might guess it has something to do with joining that spliff filter/mouthpiece, but it seems not.

By 1821, "joint" had become an Anglo-Irish term for an annex, or a side-room that is "joined" to a main room. By 1877, this had developed into U.S. slang for a place, building, or establishment that had a negative or questionable association - like an opium den.

By 1935, "joint" was being used to refer to the hypodermic needles used to inject heroin and other drugs at such establishments.

According to the Online Etymology Dictionary, its first usage in the sense of "marijuana cigarette" is dated to 1938.

Before we get back to the band, let's just say that for our international readers in Europe, some Commonwealth nations and the Middle-East, joints or "spliffs" are rolled by mixing cannabis or hashish with tobacco.

A more modern usage of the past 20 years in North America, is the term a "blunt" which is rolled using a cigar skin, from which the filler tobacco has been removed, replaced by marijuana. 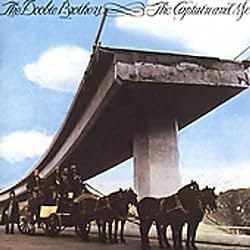 The Doobie Brothers played live all over Northern California in 1970 and attracted enough of a following to get a contract at Warner Bros. Records. Their following was not essentially potheads but leather jacketed motorcycle fans.

But the band's 1971 self-titled debut album

didn't really play to that audience and featured acoustic guitars and some country influences.

recording of "Jesus Is Just Alright."

With some changes to the rhythm section, their sound became more of a mashup of R&B,  country, bluegrass, hard rock, roadhouse boogie, and rock and roll.

from the 1973 album The Captain and Me

Personally, I liked the addition of Steely Dan

They had their first #1 single with "Black Water."

What Were Once Vices Are Now Habits

was a multi-platinum album. The album also has the horn-driven funk song "Eyes of Silver" and during this period and for several subsequent tours, the Doobies were often supported on-stage by Stax Records legends The Memphis Horns

to add songs to Simmons and Porter's offerings. The resulting album was Takin' It to the Streets

which marked another change to the sound which pleased some listeners and pissed off some of their original followers.

Their harder guitar-based rock gave way to "blue-eyed soul" and soft rock with keyboards and horns.  Baxter and MacDonald had both spent time in Steely Dan and Baxter's playing was more jazz-inflected guitar and McDonald's voice became the voice of the band in this period. His "Takin' It to the Streets,"

and "It Keeps You Runnin"

A greatest hits compilation, Best of the Doobies

, also came out that year and it was certified in 1996 by the RIAA as "Diamond" for sales in excess of ten million. 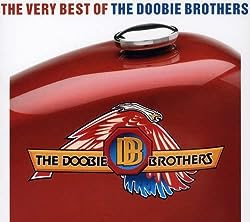