They were one of the first popular alternative rock bands. Their first single, "Radio Free Europe

", came out in 1981 on the independent record label Hib-Tone. The single was followed by the Chronic Town EP in 1982, the band's first release on I.R.S. Records. 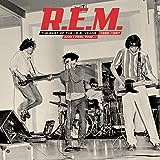 The obvious origin of the band's name is that R.E.M. is that it is a legitimate acronym for "rapid eye movement." That term was first used in the early 1950s when REM sleep was identified as a normal stage of sleep characterized by the rapid and random movement of the eyes.

The allusion to dreaming is a nice one for the band, but they maintain that it was not selected for that reason.

The band had no name as they went through several months of rehearsing and even when they played their first show on April 5, 1980 at a friend's birthday party held in a converted Episcopal church in Athens.

They had a number of pretty terrible names as possibilities including "Twisted Kites", "Cans of Piss", and "Negro Wives." R.E.M. is supposedly a random dictionary grab by Stipe.

In 1983, the group released its critically acclaimed debut album, Murmur

, and built its reputation over the next few years through subsequent releases, constant touring, and the support of college radio.

A reader of this blog wrote to say he heard that it comes from a measurement, as in 3 microREMs, with one microREM being one-millionth of a "roentgen equivalent man."

That's interesting, unsubstantiated and I still like the dreaming allusion a lot better.

Following years of underground success, R.E.M. achieved a mainstream hit in 1987 with the single "The One I Love

". The group signed to Warner Bros. Records in 1988, and began to be more political and environmental in their songs. They also started playing large arenas worldwide. 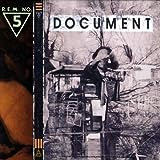