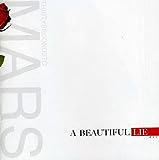 was started in 1998 by actor Jared Leto and his brother Shannon. Matt Wachter later joined the band as bassist and keyboard player. After working with guitarists kevin Drake and Solon Bixler, Tomo Miličević eventually came in to be the fourth memeber.

A reader, Mike Driscoll, alerted us to info on Wikpedia about the band's name origin.

Former member Matt Wachter has said that the band's name "actually comes from a thesis that the band found online that was written by a former Harvard professor. And one of the subsections of the thesis was titled 'thirty seconds to mars' and he goes on to talk about the exponential growth of technology that relates to humans and saying that we are quite literally thirty seconds to mars. What it means to us is, we thought it best described our music, in short." 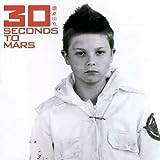 Then again, Jared Leto said in an interview that "the name 30 Seconds To Mars has little to do with space, the universe or anything like that. It is a name that works on several different levels. Most importantly, it is a good representation of our sound. It's a phrase that is lyrical, suggestive, cinematic, and filled with immediacy. It has some sense of otherness to it. The concept of space is so overwhelming and all encompassing I doubt there is a song written that doesn't fall within it."

To further clear (or muddy) the origin waters, Shannon Leto, supporting the Wachter explanation said that the name "represents a lot of things. This professor had a thesis. It was talking about where technology was going; the evolution of man and how that plays a role. A sub-category was 30 Seconds to Mars. It was like the exponential growth of humans. We are literally 30 seconds away from Mars. Everything is right here and right now; everything is just so crazy and fast."

As of this posting, the band has 14 albums