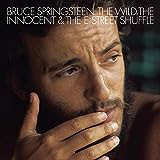 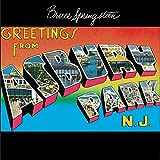 In the good old Jersey shore town of Belmar...

E Street. Not far from where Bruce Springsteen

and the band used to rehearse in the 70's (at original band member David Sancious' mom's house). Here we are at the crossroads with 10th Avenue, where the "freeze-out" occurred. (Bruce has said that he has no idea what a "freeze-out" would actually be.)

in 1973, he didn't use many backup musicians, but on the next album, The Wild, the Innocent, And The E Street Shuffle

was important to the overall sound.

In the late 1960s and early 1970s there was a very active music scene in and around the City of Asbury Park. Not only Bruce Springsteen and Southside Johnny and other early members of the E Street Band (Clemons, Federici, Lopez, Sancious, Tallent and Van Zandt) played in bands there but also Little Melvin & the Invaders, the Downtown Tangiers Band, the Jaywalkers, Moment of Truth, Glory Road, Child, Steel Mill (an earlier Bruce band), Dr. Zoom & the Sonic Boom, the Sundance Blues Band, and the first incarnation of the Bruce Springsteen Band.

) was often the first song in the band's set, and Bruce used this to introduce the band on the 1999 E Street Band Reunion tour, using it to explain what members brought to the group (Roy Bittan = Foundation, Little Steven = Soul...)

The "Bad Scooter" in the line, "Teardrops on the city Bad Scooter searching for his groove" is Springsteen (same initials) and the "Big Man" in the third verse is Clarence Clemons. Springsteen met Clemons when he came into a club in Asbury Park, where Bruce was playing. It was a stormy night, and the door actually flew off the hinges when Clemons opened it. Springsteen would talk about how he "Literally blew the door off the place."

Oh yeah - there is now an ice cream stand at 10th Avenue and the boardwalk in Belmar called 10th Avenue Freeze Out - in case you're there on a pilgrimage and need refreshment.

More on the E Street Band
Posted by Ken Ronkowitz at 18:30