Blue Öyster Cult is an American rock band formed in New York in 1967 and still active as of 2010.

." They have sold over 14 million albums worldwide and were ranked #55 on VH1's The 100 Greatest Artists of Hard Rock.

The band originated under the name Soft White Underbelly (a name the band would later occasionally use in the 1970s and 1980s to play small club gigs around the U.S.) in 1967 on Long Island, New York. "Soft White Underbelly" comes from a phrase used by Winston Churchill in describing Italy during World War II.

The name "Blue Öyster Cult" came from a 1960s poem written by their manager Sandy Pearlman. (His poetry was later used more extensively in their 1988 album Imaginos

.) In Pearlman's poetry, the "Blue Oyster Cult" was a group of aliens who had assembled to secretly guide Earth's history.

The addition of the umlaut over the Ö was later copied by other bands like Motörhead, Mötley Crüe, and Queensrÿche. 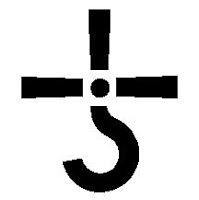 The hook-and-cross logo was designed by Bill Gawlik in January 1972 and appears on all of the band's albums.

Some people see in it three exclamation marks and a backward question mark, but the design has more classical origins.

It's also the alchemical symbol for lead (a heavy metal!) which fits with the heavy and distorted guitar sound of the band and encouraged the band's "heavy metal" categorization.

The band was billed, only once, as The Blue Öyster Cult on the cover and label of their second album, Tyranny And Mutation

Don't Fear the Reaper: The Best of Blue Öyster Cult