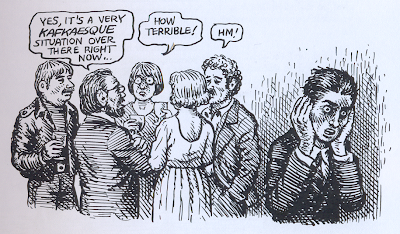 "Kafkaesque" is an eponym used to describe concepts, situations, and ideas which are reminiscent of the literary work of the writer Franz Kafka

The term generally means a senseless, disorienting, frightening complexity. It is similar to the bureaucracies found in his novels The Trial and The Castle, and some stories such as "The Metamorphosis."

The term has become used in a less literary and looser sense as surreal situations and ones where reality seems distorted in some bizarre way or are incomprehensibly complex, bizarre, or illogical.

, a woman tells Alvy after sex that it was a Kafkasque experience. "I mean that as a compliment," she adds when he seems understandably baffled.

, the protagonist is supposed to go to a meeting but isn't told the time of the meeting. He assumes it will be at 9 o'clock, but arrives an hour late and is told he should have been there at 8:45. The next week, he shows up at 8:45, but no one is there. He feel absurd when arriving early and guilty when late.
Posted by Ken Ronkowitz at 18:00