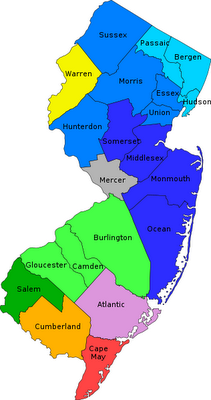 New Jersey was first claimed by the Dutch. The Dutch colony of New Netherland consisted of parts of several modern Middle Atlantic states.

Although the idea of land ownership was not recognized by the Native Americans who already occupied the area (see below), the Dutch West India Company policy required their colonists to "purchase" land from the natives.

Micheal Pauw established a patroonship named Pavonia along the North River which eventually became the Bergen. Peter Minuit's purchased lands along the Delaware River to establish the colony of New Sweden.

The entire region became a territory of England in 1664, when an English fleet took control of Fort Amsterdam and annexed the entire province.


During the English Civil War the Channel Island of Jersey remained loyal to the Crown and gave sanctuary to the King.

King James II granted the land between the Hudson River and the Delaware River (the land that would become New Jersey) to two friends who had remained loyal through the English Civil War: Sir George Carteret and Lord Berkeley of Stratton. The area was named the Province of New Jersey. 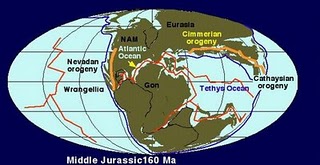 If you really want to go back in time, around 180 million years ago, during the Jurassic Period when the continents had not shifted, New Jersey bordered North Africa. (see Pangaea).

The pressure of the collision between North America and Africa gave rise to the Appalachian Mountains.

Then, about 18,000 years ago, the Ice Age resulted in glaciers that reached New Jersey. As the glaciers retreated, they left behind Lake Passaic

, as well as many rivers, swamps, and gorges.

New Jersey was originally settled by Native Americans, with the Lenni-Lenape

being dominant at the time Europeans arrived.

The Lenape were loosely organized groups that practiced small-scale agriculture (mainly based on corn) in order to increase their largely mobile hunter-gatherer society in the region surrounding the Delaware River, the lower Hudson River, and western Long Island Sound.

The Lenape society was divided into matrilinear clans (based upon common female ancestors) and these clans were organized into three distinct groups identified by their animal sign: Turtle, Turkey, and Wolf. They first encountered the Dutch in the early 1600s, and their primary relationship with the Europeans was through fur trade.