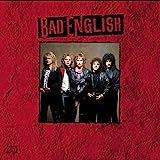 was an American/British rock "supergroup" formed in 1988, reuniting keyboardist Jonathan Cain with singer John Waite and bassist Ricky Phillips, his former bandmates in The Babys

. Jonathan Cain and guitarist Neal Schon, who had enjoyed enormous success in Journey, joined with Waite after Journey

The members decided on a name for the band while playing pool. John Waite missed a shot and Jonathan Cain made a comment on how bad his "english" was - referencing the spin a player puts on the cue ball - not poor English grammar.

The first album, simply titled Bad English, had three hit singles, including the number one hit "When I See You Smile", "Price of Love," and "Possession."

They released 6 albums including greatest hits compilations. Waite commented in interviews that he was uncomfortanle with their stadium-sized venues and "corporate rock" image. After the band split, he went solo and has remained a solo act ever since. Drummer Deen Castronovo went on to join the reformed Journey