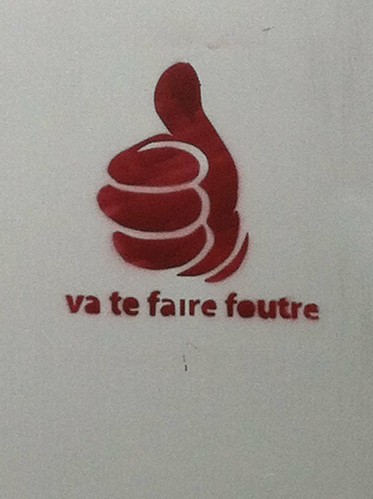 I saw the image shown here on a college campus wall and had to look up the translation of the French phrase. I assumed it meant something positive to go with the common American "thumbs up" as meaning "okay" or "good job."
It turns out that even the imperfect Google Translate tool knows that this is a "fuck you."

But why pair it with the thumbs up?

Logically, our positive connotation with the thumbs up is not universal.

I learned from a post by Brendan I. Koerner that American soldiers learned in Iraq that "thumbs up" traditionally translates there as an insult like "Up yours" or perhaps also as "fuck you."

The hand gesture also has a pejorative meaning in parts of West Africa, Russia, Australia, Iran, Greece, and Sardinia, according to Roger E. Axtell's book Gestures: The Do's and Taboos of Body Language Around the World

The gesture became difficult for American soldiers to interpret as some Iraqis had adopted the gesture in its American usage to show they were cooperative with the soldiers.

Many of us were told that the gesture goes back to Roman gladiatorial contests when a beaten man could be spared if the emperor gave the thumbs up, and that the thumbs down meant he should be killed. That idea was reinforced by many American films of the "swords and sandals" genre. However, that interpretation has been called into question by classics professor Anthony Philip Corbeill who concluded in 1997 that the thumbs up actually meant "kill him." He based this on a study of hundreds of ancient artworks. He says that the gesture used to spare a gladiator was a closed fist with a wraparound thumb.

Back to those Iraqis giving Americans the "thumbs up" sign... The Army's Defense Language Institute manual on international gestures (yes, there is such a thing.) updated after the first Gulf War, says that "Middle Easterners of the Arabian Peninsula adopted this hand movement, along with the OK sign, as a symbol of cooperation toward freedom."

Desmond Morris' book on the meanings and origins of gestures

pegs this in English as a medieval custom used to seal business transactions. The two parties would lick their thumbs and then with the thumbs up, press them together to seal the deal. 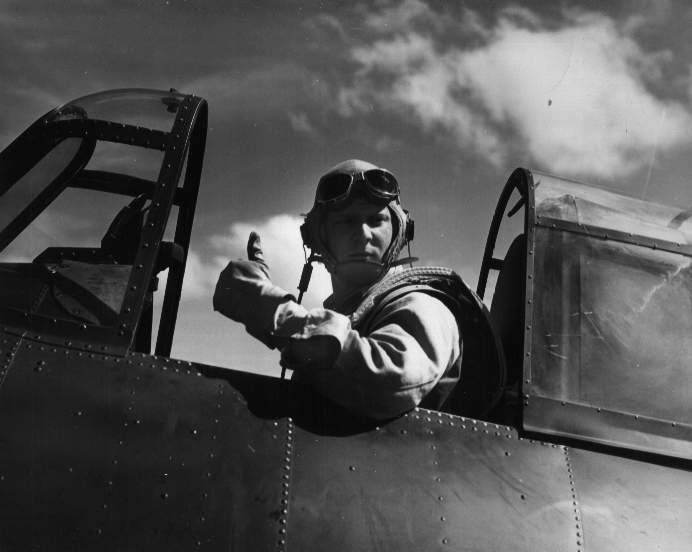 The gesture has become part of Western culture and is used in various applications. Americans are used to seeing wartime pilots give the thumbs up to communicate with ground crews that everything was good for take-off.

Hitchhikers in the West traditionally use a thumbs up gesture to solicit rides from oncoming vehicles.

In scuba diving, the thumbs-up gesture indicates that he or she is about to stop his or her dive and ascend. The diving signal for approval is the A-ok sign.

In basketball, when a held ball occurs, an official will jerk both thumbs in the air, signalling that a jump ball is in order.

In baseball, umpires will sometimes jerk a thumbs-up over their shoulder as an "out" signal

The Indian cola brand Thums Up, now owned by The Coca-Cola Company is named after this symbol, and uses it as its logo.