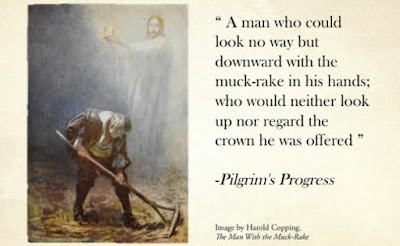 The term muckraker was once used to describe American journalists who attacked established institutions and leaders as corrupt. The modern day, and much nicer, term would be investigative journalist.

But the term had a pejorative connotation in British English, and the term's origin is a lot earthier.

A muck rake is an actual tool still used to clean out "muck,"(manure) from stables and create a dung (another term for animal excrement) heap or pile.

This quite unpleasant job was used in 1684 by John Bunyan in his book Pilgrim's Progress. Bunyan used it to represent man's preoccupation with earthly things. His character, The Man with the Muckrake, "could look no way but downward."

Jonathan Swift in Gulliver's Travels has Gulliver encounter a group of people who do useless "research." One of their projects is to examine the excrement of suspicious persons to find evidence to confirm their suspicions. This muckraking also sounds like some of the most base of the journalistic type.

In 1906, Teddy Roosevelt used Bunyan's words to criticize journalists who focused too much on exposing corruption. These "men with the muck-rakes" were like Bunyan's character and he said they needed to know "when to stop raking the muck, and to look upward."

After that speech, the reporters willingly took up the the term "muckraker" as a badge of honor.

In contemporary American use, the term usually describes journalists who are adversarial and write to advocate reform and change.

In Britain, it still has a less lofty meaning and probably would refer to a  journalist (often on a tabloid newspaper) who focuses on scandal about celebrities and well-known personalities.
Posted by Ken Ronkowitz at 11:35