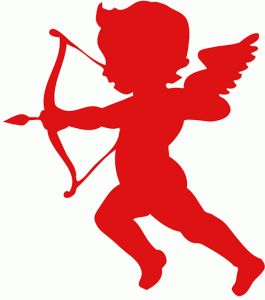 A silhouette is the image of a person, animal, object or scene represented as a solid shape of a single color, usually black, with its edges matching the outline of the subject. The interior of a silhouette does not have any features or details. It is usually on a light/white background, or none at all. A silhouette is not an outline, since it appears as a solid.

Silhouette images can now be created in any visual media, but originally they were pieces of cut paper, put on a background, and then framed.

The word silhouette is an eponym, a word derived from a person's name. In this case, it was Étienne de Silhouette, a French finance minister. He was no artist, and he did not make silhouettes. In 1759, he imposed severe economic demands upon the French people, particularly the wealthy. His austerity measures made his name synonymous with anything done or made cheaply. Portraits of people made by doing inexpensive cutouts (this was pre-photography) on black cards were the cheapest way of recording a person's appearance. 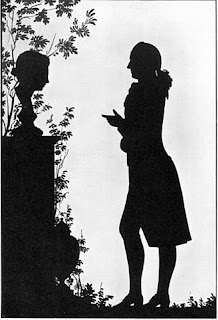 The term silhouette was around since the the 18th century, but only applied to the art of portrait-making in the 19th century. The pieces were also called “profiles” or “shades.”

They could be painted on ivory, plaster, paper, card, or in reverse on glass. Ones that were “hollow-cut” meant the negative image was traced and then cut away from light colored paper which was then laid atop a dark background. The most common was "cut and paste” where the figure was cut out of dark paper (usually free-hand) and then pasted onto a light background.