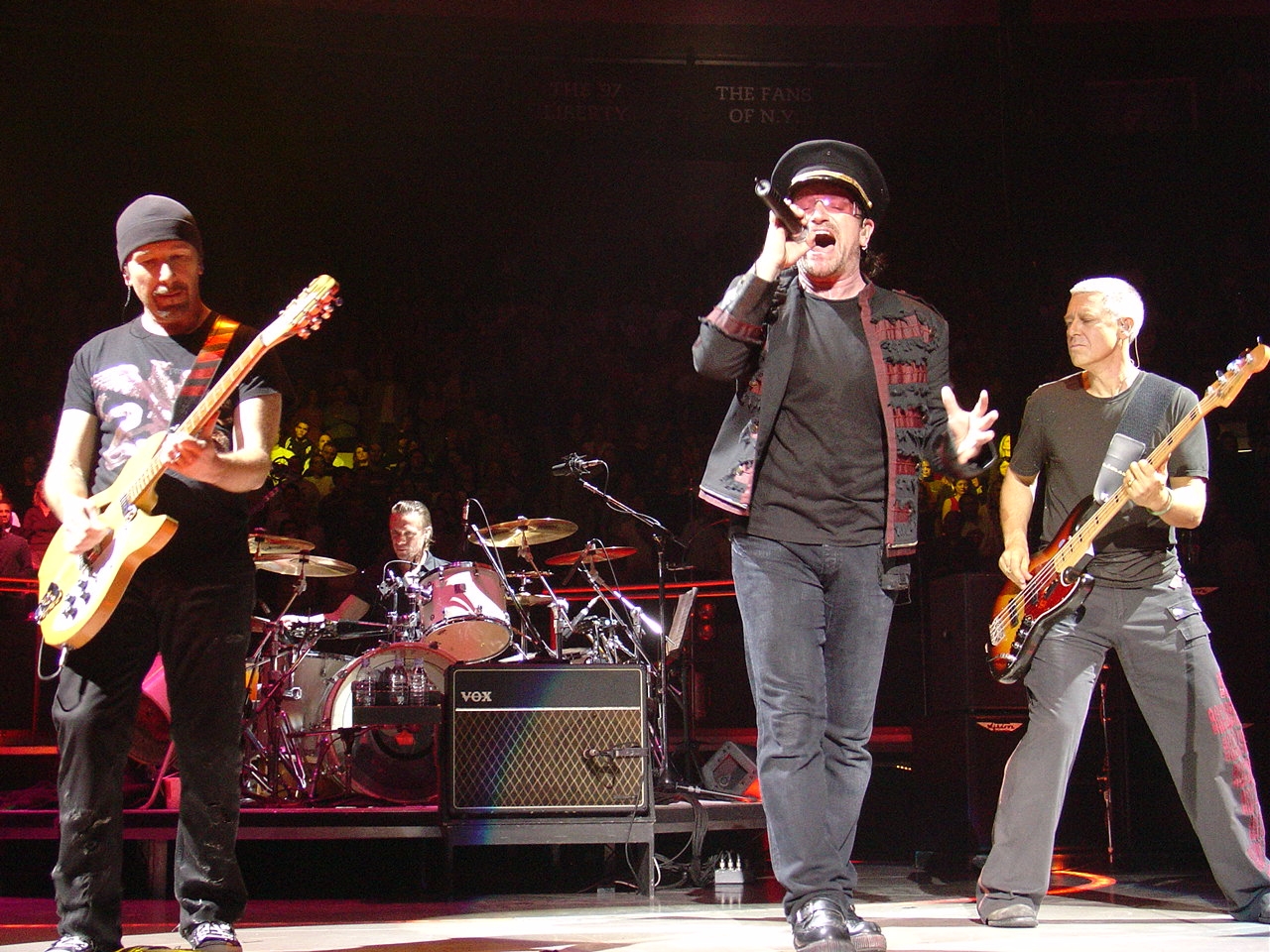 U2 is a rock band from Dublin, Ireland that consists of Bono (vocals and guitar), The Edge (guitar, keyboards and vocals), Adam Clayton (bass guitar), and Larry Mullen, Jr. (drums and percussion). They are one of the top rock acts in the world.

U2's early sound was post-punk but evolved and now includes influences from a variety of genres. A key part of their sound comes from The Edge's guitar playing and Bono's distinctive vocals.

Their songs' lyrics are frequently spiritual imagery, personal themes and also socio-political concerns. Bono is well known for his support of many causes.

The band formed in Dublin in 1976 when 14 year old Larry Mullen, Jr. put a sign on his school bulletin board looking for musicians for a new band.

The resulting group was called The Larry Mullen Band "for about ten minutes" but the addition of Bono meant a new center.

This band was Mullen on drums, Paul Hewson (Bono) on vocals, David Evans (The Edge) and also his older brother Dik Evans on guitar, Adam Clayton, on bass guitar. They used the name "Feedback" for it's guitar amplification reference. They were basically, like most young bands, a cover band and showed the influence of punk bands such as The Jam

, and The Sex Pistols

In March 1977, the band changed their name to "The Hype". The older Dik Evans walked away from the band (literally, during a gig) the following year. The remaining four band members started using more original material and were billed as "U2".

Supposedly, Steve Averill, a punk rock musician and family friend of Clayton's, had suggested six potential names from which the band chose "U2."

There is no solidly validated reason for the name choice other than perhaps its brevity, intentional ambiguity and opportunities for interpretations.

I couldn't find any further explanation on U2's official website or in the book, U2 by U2.

But there are many references that might have influenced the choice. Best known to Americans is that a U2 is a type of spy plane used by the United States in the 1960's which was made famous when a 1960 international incident. A U.S. Lockheed U-2 plane over the Soviet Union was shot down over Russia and resulted in the pilot being taken as a prisoner during the Cold War.

A U2 is also a dry-cell battery type now known in the U.S. as a D battery.

A number of European railway systems have a U2 as part of their designations.

I have also seen a reference to a U2 being a government form used in Ireland - but that seems to more likely be the origin, as we have explicated, for UB40.

Email ThisBlogThis!Share to TwitterShare to FacebookShare to Pinterest
Labels: bands, U