Do you call any small adhesive bandage a band-aid? Do you call a paper facial tissue a kleenex? If so, you are using a brand as a generic noun.

Band-Aid is a brand name of Johnson & Johnson's line of adhesive bandages and has been used since the 1920s. Kleenex is the brand name for a variety of paper-based products, such as facial tissue, bathroom tissue, paper towels, tampons, and diapers. It has also been in usage since the 1920s and is now part of Kimberly-Clark.

Some brand names become the vernacular word for an entire category. Going back to when a category emerges, sometimes one brand is dominant and so becomes the generic. Such was the case for refrigerators. 60 years ago it was fairly common for people to call any refrigerator a "fridge." That might seem like a shortening of refrigerator, but it actually was a shortening of the Frigidaire brand which early on dominated the market.

Some of these generic nouns are more likely to be used by an older generation that grew up hearing them. Would a young child say fridge, kleenex or band-aid? If so, it was probably learned from a parent or grandparent.

Is this a good thing for a brand? Yes and no. It certainly gets a brand name out into the public consciousness. The usage probably indicates, at some point in time, a dominance in the market. But when people use your brand name but actually are referring to (or purchasing!) another company's product, that weakens your brand and trademark. Generic nouns drop the capitalization of a product and at least that should distinguish that usage from the actual brand.

In the mid-20th century, the brand Xerox became the generic term for a photocopy. "I only have a xerox of the invoice." It even was used for a time as a verb for the process - "Make me a xerox of this document." The Xerox corporation was once fairly well known for opposing this usage and would contact publications that used lowercase "xerox" as a noun or verb and did not mean an actual Xerox copy or copy machine made by their company. That is required for trademark protection, and it can become a legal issue. Nowadays, with many other copiers in the market, it is likely that we would simply say "make a copy of this document." You might say that this indicates that the Xerox brand dominance has diminished. 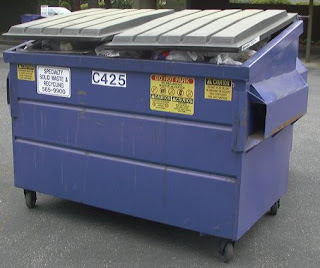 The word "dumpster"goes back to 1935 when the Dempster-Dumpster system of mechanically loading the contents of standardized containers onto garbage trucks was patented by Dempster Brothers.

The actual containers were called Dumpsters (capital D) which was a blend word of the verb "dump" and the company's name. The company also made the Dempster Dumpmaster, which was the first successful front-loading garbage truck.

No doubt you have seen these trucks and these containers and have used the word as a genericized trademark. But most companies try hard to protect a trademark so that the word is used for their own products and services. It is a tough cultural battle. Generic nouns have a life of their own and often spread like a meme.

Some generic brand name nouns also are used as verbs. Such was the case with Xerox and in more modern usage, it is the case with Google. Way back in the late 1990s before Google was even a company, co-founder Larry Page used the word as a verb meaning "to search." This was when the search engine was still located at google.stanford.edu.

At one time, you might have said you were going to "google it" when you were actually going to search online using Yahoo, AltaVista or any one of the other competing search engines. But Google's search dominance is so great that today it's very likely that the person is using Google to google (search). In 2003, the American Dialect Society called google a transitive verb, and the Oxford English Dictionary made it official in June 2006.
Posted by Ken Ronkowitz at 20:00