A generic trademark (AKA genericized trademark or proprietary eponym) is a trademark or brand name that becomes so popular that is has become either generic name for, or synonymous with, a general class of product or service. This is not something that a trademark holder wants to happen. So, in this case, you can be too popular. The process of a product's name becoming genericized is known by the rather terrible term of genericide.

When this genericide occurs, its original owner loses some of their intellectual property. Examples of generic trademarks include: Thermos, Kleenex, ChapStick, Aspirin, Dumpster, Band-Aid, Velcro, Hoover, Jet Ski and Speedo. This process sometimes is limited to a particular country, though it can apply worldwide. (List of generic trademarks)

A recent case is Chooseco LLC, the publisher of the “Choose Your Own Adventure” book series, suing Netflix Inc., saying the streaming company’s recently released interactive film “Black Mirror: Bandersnatch” used the series’ trademark without permission. As is always the case, the trademark owner claims that this use is besmirching the brand’s value.

The generic "teleprompter" is now used for the display device that prompts a person speaking with an electronic visual text like cue cards. It began as the product TelePrompTer (with that internal capitalization) back in the 1950s. 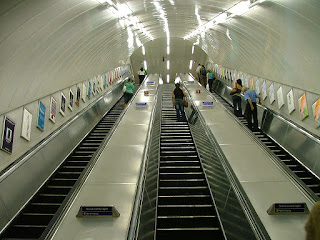 The Otis Elevator Company advertised that it offered "the latest in elevator and escalator design," and thereby used the generic term "elevator" along with Otis's trademark "Escalator" product of moving staircases in the same way. Later, the Trademark Office and the courts concluded that, if Otis used their trademark in that generic way, they could not stop Westinghouse from calling its moving staircases "escalators", and a valuable trademark was lost through genericization.

In America, aspirin is the generic name for the product sold by many companies. But it is still a Bayer trademark name for acetylsalicylic acid in about 80 countries, including Canada where you will find both generic "ASA tablets" and others carrying the Aspirin trademark because the trademark owned by Bayer is still recognized there.

Genericization typically occurs over a period of time because: 1) in which a mark is not used as a trademark (i.e., where it is not used to exclusively identify the products or services of a particular business) 2) where a mark falls into disuse entirely or 3) where the trademark owner does not enforce its rights through actions for passing off or trademark infringement.

Trademark owners may consider developing a generic term for the product to be used in descriptive contexts, to avoid inappropriate use of the "house" mark. Such a term is called a generic descriptor. Examples: "Kleenex tissues" ("facial tissues" being the generic descriptor) or "Velcro brand fasteners" for Velcro brand name hook-and-loop fasteners.

It is often difficult to stop genericide, though companies such as Johnson & Johnson's effort to protect their Band-Aid product not to be used with any similar product.

Google has tried to prevent the term 'googling' in reference to Web searches, but the Oxford English Dictionary and the Merriam Webster Collegiate Dictionary have both noted the widespread use of the verb coinage and yet still defining "google" (all lower case) as a verb meaning "to use the Google search engine to obtain information on the Internet."

I recall examples of companies issuing lawsuits for one dollar to prevent the genericization of a core trademark. The Xerox corporation tried extensive public relations campaigns to push the use of "photocopy" as a verb, rather than the generic "xerox." They were successful, but part of that comes from the fact that there became so many other copier companies that the shorter "copy" is now the most common verb used.

You will find new examples in the news all the time. Adobe Systems doesn't want their trademarked product, Photoshop, used as "photoshopped" to mean a modified image.