I came across a book, OK: The Improbable Story of America's Greatest Word, that got me thinking about this common word that doesn't get much thought. Is okay (AKA OK or O.K.)

OK is such a common colloquial English way of denoting approval, assent, or acknowledgment, that I also posted this on my One Page Schoolhouse website.

"Okay" has spread as a loanword to other languages.

It has shades of meanings and is used as several parts of speech: As an adjective, "It's okay to sit here" means "acceptable" but "Their food is just okay" means "mediocre" rather than being "good."

People use it as an adverb ("She sings okay.")

"Okay, I'll leave now" makes it an interjection meaning compliance and "Okay, I like that option" indicates "agreement."

You can use it was a verb, as in "The office okayed my travel expenses."

These two letters (I'm not a fan of the "O.K." version because I don't see it as an abbreviation.) are very versatile. 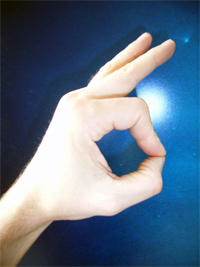 The OK or ring gesture is a common hand sign. It even has an online Unicode symbol (U+1F44C) and is a commonly used emoticon online 👌 . Connecting the thumb and index finger into a circle, and holding the other fingers straight or relaxed away from the palm indicates something is okay.

Divers use the sign to say that you are okay or to ask another person if they are okay.

Take note that in other contexts or cultures, this same gesture has different meanings or connotations that are not simply linguistic, including ones that are negative, offensive, financial, numerical, devotional. For example, in France the "OK" gesture bears both positive and negative connotations, and in parts of the Arab world, this sign represents the evil eye and is used as a curse.

The origin is not definitive. One version is that at a Chicago bakery named O. Kendall and Sons they stamped Army biscuits with the company initials OK, or maybe it was a Boston baker named Otto Kimmel who did that on his vanilla cookies. But why attach the meanings to it beyond it being a kind of logo?

I also found that it might be d from the Choctaw word "okeh" -which means "it is true." That sounds more sensical, though I found no path for its entry into English.

There is an origin that attaches "OK" to the Boston Morning Post back in 1839 where as an editor's joke it was used as an abbreviation for a misspelled version of the phrase "all correct." Huh? That makes no sense to me.

I prefer a New Jersey diary entry of William Richardson in 1815. He is writing about a journey from from Boston to New Orleans and writes: "Arrived at Princeton (NJ), a handsome little village, 15 miles from N Brunswick, ok at Trenton, where we dined at 1 P.M."  We assume he meant that he is giving his Trenton meal an "all right" review. But it is unlikely that Richardson invented the ok term as a personal short form, so where did he get it from and why did it spread?

We also sometimes use "A-OK" to mean a stronger form of okay. The term seem to have originated with the space program.

There is also "okie-dokie," a slang term that also means okay that was popularized in the Our Gang (The Little Rascals) films.

OK had usefulness as a short form in 19th century telegraph messages with their abbreviations that resemble our own Tweets. And if OK isn't enough of a shortening of okay, you will also see the single "K" in text messages.