JOHN CAFFERTY and the BEAVER BROWN BAND are best remembered for their soundtrack to the movie Eddie and the Cruisers.
,
The band was from the Cranston Rhode Island area in the early 1970s. They were doing the garage band practice when someone saw a Dutch Boy paint can that was called Beaver Brown and that became the original name of the band.  Lead vocalist and rhythm guitarist John Cafferty's name was added to the band's name for their first album's release. 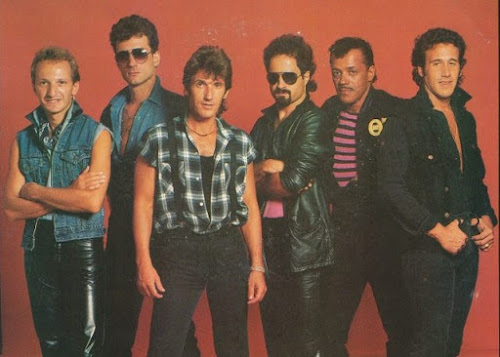 Before the hit soundtrack made them famous, they had some early success in 1980 with a self-released single that had the songs "Wild Summer Nights" and "Tender Years" - both of which would appear later on the movie soundtrack. Though it had East Coast airplay, they didn't get signed by a label.
The band was sometimes compared favorably to the sound of Bruce Springsteen & The E Street Band and critics liked them but it was an offer from producer Kenny Vance to score a movie he was doing that launched their career.
The film was based on the novel of the same name by P. F. Kluge about some reporters doing a story on a fictional New Jersey bar band called Eddie and the Cruisers that was legendary locally in their time locally.
The film was in heavy rotation on HBO in the early 1980s and the soundtrack album reached the top 10 on the Billboard chart and produced a top 10 single, "On the Dark Side." The album was eventually certified triple Platinum by the RIAA.
John Cafferty & The Beaver Brown Band continue to tour and other songs by them have been used on the soundtracks of other major motion pictures.
=
Posted by Ken Ronkowitz at 11:11