is a state of the United States of America located in the southwestern region of the United States. The capital and largest city is Phoenix. Arizona is the 48th state and last of the contiguous states admitted to the Union, achieving statehood on February 14, 1912.

Arizona is one of the Four Corners states. It borders New Mexico, Utah, Nevada, California, touches Colorado, and has a 389-mile (626 km) international border with the states of Sonora and Baja California in Mexico. It is the largest landlocked U.S. state by population. In addition to the Grand Canyon, many other national forests, parks, monuments, and Indian reservations are located in the state. 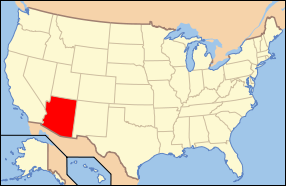 The etymology of the name "Arizona" is not clearly fixed on one explanation. Historians note the Basque phrase aritz ona, "good oak, although the O'odham phrase alĭ ṣonak, "small spring" is also considered a possibility.

The name "Arizonac" was initially applied to the area near the silver mining camp of Planchas de Plata, Sonora, and later, in its shortened form of Arizona, it was applied to the entire territory.

Marcos de Niza, a Spanish Franciscan, explored the area in 1539 and met its original native inhabitants, probably the Sobaipuri. The expedition of Spanish explorer Coronado

entered the area in 1540–42 during its search for Cíbola

When Mexico achieved its independence from Spain in 1821, what is now Arizona became part of the Mexican Territory Nueva California, also known as Alta California.

In the Mexican–American War (1847), the U.S. occupied Mexico City and forced the newly founded Mexican Republic to give up its northern territories, including what later became Arizona. The Treaty of Guadalupe Hidalgo (1848) specified that the sum of $15 million US dollars in compensation be paid to the newly formed Republic of Mexico.

A new Arizona Territory, consisting of the western half of New Mexico Territory was declared in Washington, D.C., on February 24, 1863.

Other names including "Gadsonia", "Pimeria", "Montezuma", "Arizuma", and "Arizonia" had been considered for the territory. However, when President Lincoln signed the final bill, it read "Arizona", and the name became permanent.