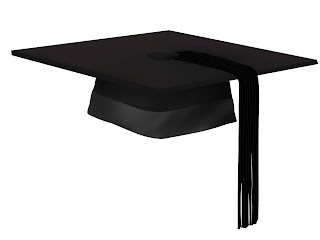 This is worn at colleges and by high school pupils during the presentation of their diplomas.

The square academic cap, graduate cap, cap, is called a mortarboard because of its similarity in appearance to the hawk used by bricklayers to hold mortar so that they can use a trowel to scoop it.

It is also called, outside the U.S. an Oxford cap. Think of the horizontal square (mortar)board as being fixed upon a skull-cap. We do call it in conjunction with an academic gown, a "cap and gown."

I also found this cap called a square, trencher, and corner-cap. The cap, gown and sometimes a hood, are now the customary uniform of a university graduate, in many parts of the world, following a British model.

Just this past week, I saw several news items about opposition to different color gowns for males and females that is sometimes part of the ceremony, especially in high schools. The issue of equality and transgender students has brought it to the point of controversy.

The mortarboard is generally believed by scholars[who?] to have developed from the biretta, a similar-looking hat worn by Roman Catholic clergy. The biretta itself may have been a development of the Roman pileus quadratus, a type of skullcap with superposed square and tump (meaning small mound). A reinvention of this type of cap is known as the Bishop Andrewes cap.[7]:22–23 The Italian biretta is a word derived from berretto, which is derived itself from the Latin birrus and the Greek pyrros, both meaning "red." The cone-shaped red (seldom in black) biretta, related to the ancient Etruscan tutulus and the Roman pileus, was used in the fourteenth and fifteenth centuries to identify humanists, students, artists, and learned and blooming youth in general. The shape and the colour conveyed meaning: Red was considered for a long time the royal power, whether because it was difficult to afford vestments of such solid and brilliant dye or because the high symbolic meaning of blood and life, thus the power over life and death.


In US graduation ceremonies, the side on which the tassel hangs can be important. Sometimes it is consistent among all students throughout the ceremony, in other cases it differs based on level of study with undergraduate students wearing the tassel on the right, and graduate student wearing them on the left. In some ceremonies, the student wears the tassel on one side until reception of the diploma; then it is switched to the other.

Universities in the United States might use tassels in black or the school's colors, usually for higher degrees.

For bachelor's degrees the tassel may be colored differently from the traditional black or school colors to represent the field (or one as closely related as possible) in which the wearer obtained his or her education. In 1896 most colleges and universities in the United States adopted a uniform code governing academic dress. The tassel may be adorned with a charm in the shape of the digits of the year.

Doctorate holders of some universities wear the mortarboard, although the round Tudor bonnet is more common in Britain. The 4, 6, or 8 cornered "tam" is gaining popularity in the US, and in general a soft square tam has some acceptance for women as a substitute for the hard 'square'.
Posted by Ken Ronkowitz at 15:00