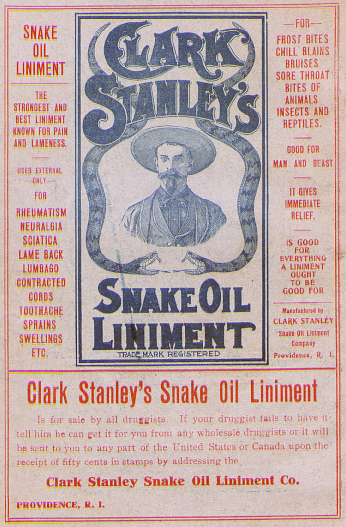 Once upon a time there were bottles of snake oil. Now, it exists only in a figurative sense.

Historically, snake oil came to America via the Chinese laborers who were building the transcontinental railroad. For them, snake oil was a traditional folk liniment used to treat joint and muscle pain that actually had a connection to snakes (venom).

Rival American "medicine" salesmen used the term generically for things marketed as miraculous remedies whose ingredients were usually secret, and it was definitely a negative term.

Some of that snake oil and those other "medicines" were effective, though it might have been a placebo effect. But that's true of many modern quick cures too.
Posted by Ken Ronkowitz at 10:48

Email ThisBlogThis!Share to TwitterShare to FacebookShare to Pinterest
Labels: idioms and phrases