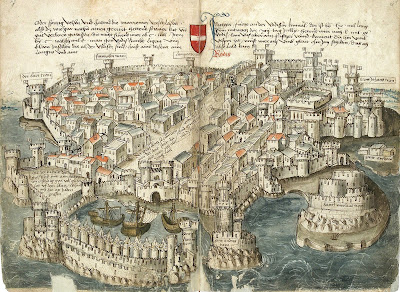 If you look up the origin of "city," you find that it comes from the early 13th century. In medieval usage, it was a cathedral town, but originally it referred to "any settlement," regardless of size.

The word city goes back to Latin civitatem originally meaning "citizenship, the condition or rights of a citizen. But the Latin word for "city" was urbs, which is where we get the adjective "urban."

There are too many names of cities and towns to name and explain, but here are some common naming conventions used in English, particularly in America.

The obvious conventio is to name a new town after an older one. In the U.S., we have Rome, NY; Moscow, IN; Berlin and Vienna, VA. This was sometimes a homage to where the early settlers had come from, but also a way to add distinction to a new place.

Settlers to new places who wanted to harken back to their old world often added "New" in front of their beloved city. New York, New Jersey, New Mexico, etc.

Adding a suffix such as town, ton, burgh, city, ville, land, or polis on the end of a noun (name or otherwise) gives us Smithville, Beaverton, Irvington, Indianapolis, Roseland etc.

Other suffixes that are not only used for place names are also used. Ford, fort, field, plains, view, burgh, side, grove, wood, and way give us Frankfort, Springfield, Pompton Plains, Plainview, Cedar Grove, Maplewood etc.

There are also conventions in other languages. For example, the suffix -au, -aue (related to rivers or water), is used in German for settlements at rivers and creeks, such as Passau.

The suffix -burg (meaning borough) is seen in Hamburg, Luxembourg, Regensburg, Salzburg (also with the Ancient Roman reference to salt).

The -furt means a "ford", such as with Erfurt and Frankfurt.

You must be careful in your naming though. Syracuse, New York was named for the classical city in Sicily that was founded as a Corinthian colony in the 8th century B.C.E.. But it is likely that it comes from a pre-Hellenic word, perhaps the Phoenician serah  meaning “to feel ill,” in reference to its location near a swamp.

The city of Bayonne, New Jersey comes from bayonet, a type of dagger (usually fitted to a firearm) from the French baionnette. Bayonne, a city in Gascony, is supposedly where they first were made.
Posted by Ken Ronkowitz at 20:00

Email ThisBlogThis!Share to TwitterShare to FacebookShare to Pinterest
Labels: Cities and Towns