Rose of Sharon and Lily of the Valley


The Rose of Sharon and Lilies of the Valley are two of a number of flowers referenced in some translations of the Bible. However, there are many translations and interpretations of what the actual flower being referenced is in our modern taxonomy.

Rose of Sharon is a common name used to describe different species of flowering plants. It is not an actual rose but generally a member of Rosaceae.

The name "rose of Sharon" first appears in English in 1611 in the King James Version of the Bible. In the song of Solomon ch2 v1 the speaker (the beloved) says "I am the rose of Sharon, the lily of the valley".

Earlier translations had called it “the flower of the field.” Other translations of the Hebrew word hasharon are translated as rose, lily jonquil and crocus and some scholars have suggested that the Biblical "rose of Sharon" may also be a tulip or narcissus or simply a sprouting bulb.

The Biblical interpretations are many, including:
- A kind of crocus growing as a lily among the brambles ("Sharon", Harper's Bible Dictionary)
- A crocus that grows in the coastal plain of Sharon (New Oxford Annotated Bible);
- Lilium candidum, more commonly known as the Madonna lily, a species of lily suggested by some botanists, though likely in reference to the lilies of the valley mentioned in the second part of Song of Solomon 2:1. 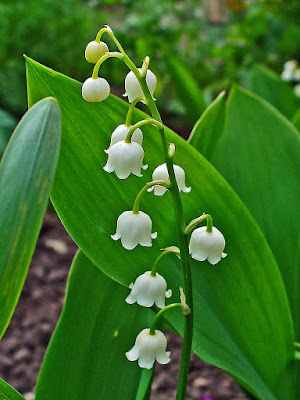 Lily of the valley (or lily-of-the-valley) has the scientific name Convallaria majalis. It is a sweetly scented, but highly poisonous woodland flowering plant that is native throughout the cool temperate Northern Hemisphere in Asia, and Europe.

Scientists place it in the subfamily Nolinoideae which was formerly the family Ruscaceae - which sounds very similar to the Rosaceae of the Rose of Sharon and earlier it had been in the lily family Liliaceae.

This is also known as Our Lady's tears or Mary's tears. These names come from Christian legends that it sprang from the weeping of the Virgin Mary during the crucifixion of Jesus.

The name "lily of the valley" is used in some English translations of the Bible in Song of Songs 2:1, but the Hebrew phrase "shoshannat-ha-amaqim" in the original text (literally "lily of the valleys") does not refer to this plant but probably some other true lily.

The modern flower given this name is used symbolically as a symbol of humility and a sign of Christ's second coming and a vision of a better world.
Posted by Ken Ronkowitz at 19:00