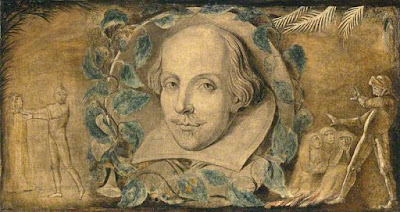 William Shakespeare has not only been credited as being the source of many words in English that he either coined or made popular, but he also is the source many writers have gone to for their own book titles.

Hamlet may be the most popular play for grabbing titles: Richard Matheson: What Dreams May Come; Edith Wharton: The Glimpses of the Moon; Peter Spence: To the Manor Born; Philip K. Dick: Time Out of Joint; Isaac Asimov: The Gods Themselves; Aldous Huxley: Mortal Coils; Graham Greene: The Name of Action.

For his novel Brave New World, Aldous Huxley went to Shakespeare’s The Tempest.  In that play, the very naive Miranda who has lived her whole life on an island knowing only her father (the wizard Prospero) and some "spirits," meets men her own age for the first time when they are shipwrecked. Seeing them, Miranda says: "O, wonder! How many goodly creatures are there here! How beauteous mankind is! O brave new world, That has such people in't!"

The popular young adult novel (and film), The Fault in Our Stars by John Green takes its title from Shakespeare’s Julius Caesar. The scheming Cassius says, “The fault, dear Brutus, is not in our stars, but in ourselves.”  Though cassius was referring to why their rank and power were below Caesar's, the novel is more on the idea that we should not blame fate for our state, but ourselves.

Pale Fire, a novel by Vladmir Nabokov, references the more obscure play Timon of Athens.
“The sun ’s a thief, and with his great attraction
Robs the vast sea; the moon ’s an arrant thief,
And her pale fire she snatches from the sun...”

Titles have also come from lines in Shakespeare's sonnets, such as Anthony Burgess' Nothing Like the Sun and Marcel Proust's Remembrance of Things Past.
Posted by Ken Ronkowitz at 18:50

Email ThisBlogThis!Share to TwitterShare to FacebookShare to Pinterest
Labels: titles