Emoji and emoticons are not the same thing.

An emoticon is a typographic display of a facial representation, used to convey emotion in a text only medium. They preceded the emoji in an earlier time of email, text messages on older mobile phones, websites and social networks when an image wasn't available.   The happy face  :-) and winking face ;-) are still used and some websites and apps will automatically convert these text characters to an emoji.

"Emoticon" is a portmanteau for emotion + icon and like the emojis that would follow, they were meant to convey pictorially a facial expression and give some indication of the tone or temper of a sender's message.

The origin probably predates the Internet but in its modern form seems to date back to 1982. Computer scientist Scott Fahlman suggested to the Carnegie Mellon University message board that :-) and :-( could be used to distinguish jokes from serious statements online. The word "emoticon" came into being shortly after that.

These combinations of punctuation marks, numbers, symbols and letters, did communicate some feelings or mood, but with newer devices and apps the more stylized emoji emerged.

Have we made progress in being able to graphically express a heart, crying face, beer mug, or pile of excrement? Debateable.

You may not know that while Western emoticons are usually written at a right angle to the direction of the text, in Japan a kind of "Japanese emoticon" called kaomojis was popular. 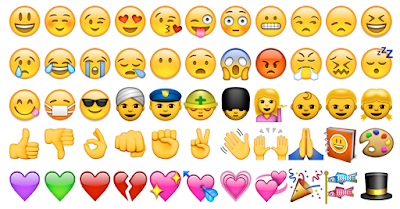 "Emoji" comes from Japanese "picture" (e) + "character" (moji). These images require no tilt of the head to be seen properly and don't rely on text characters.

Originating on Japanese mobile phones, they were created in the late 1990s by NTT DoCoMo, the Japanese communications firm, but are used worldwide, popularized by their inclusion in Apple's iPhone software. Android and other mobile operating systems quickly followed.

The resemblance of emoji to the English words emotion and emoticon is purely coincidental.

Unlike emoticons, emoji are actual pictures, but while emoticons were invented to portray emotion in environments where nothing but basic text is available, emoji are actually extensions to the character set used by most operating systems today, Unicode.

Emoji work as long as the software explicitly supports them – otherwise a placeholder icon, or even just a blank space will display.

Different services and apps have their own interpretations of what an emoji looks like. The “dancer” emoji for Twitter and Apple is a female flamenco dancer, but for Google, it was once a disco guy.
What's a💃to do?
Posted by Ken Ronkowitz at 16:50