James Bond is the fictional protagonist of a series of novels and short stories by Ian Fleming. The first Bond story appeared in the 1953 novel Casino Royale. Most of Fleming's twelve novels and two collections of short stories have also been used for film adaptations with many retaining the titles of the novels.

Ian Fleming (28 May 1908 – 12 August 1964) came from a wealthy family, and was educated at Eton, Sandhurst and, briefly attended the universities of Munich and Geneva. While working for Britain's Naval Intelligence Division during WWII, he was involved in planning Operation Goldeneye and in the planning and oversight of two intelligence units, 30 Assault Unit and T-Force. All these aspects of his life are used in the Bond novels.

GoldenEye, the film, was released in 1995 and is the seventeenth James Bond film. It was the first to star Pierce Brosnan as 007 and also the first film in the series not to take story elements from the works of Fleming.

The Bond stories were written at Fleming's Jamaican home, named Goldeneye, and he generally published a book each year. Two of his books were published after his death in 1964. 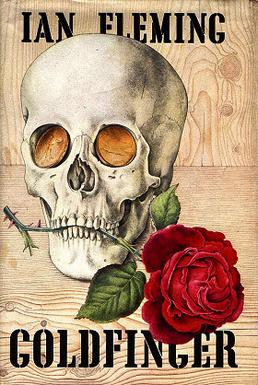 Goldfinger is the seventh James Bond novel in the series and originally it was titled The Richest Man in the World. Perhaps, Fleming should have used that original title because his revised title used the name of someone he had known, Ernő Goldfinger, who threatened to sue over the use of his name. The matter was settled out of court and the title was used for the novel and the film version.


You Only Live Twice is the eleventh novel Ian Fleming published in the Bond series and is the last published in his lifetime. I am a Bond and a poetry fan, but I didn't know that these two interests ever crossed. That particular title got inspiration from the 17th-century Japanese poet Matsuo Basho. In the novel, 007 tries his hand at writing a haiku in the style of the Japanese master.


"A Diamond Is Forever" was (and might still be) a phrase used in advertising for the company De Beers and probably Fleming just tweaked it slightly for his novel Diamonds Are Forever.

"The World Is Not Enough" is believed to originate from Alexander the Great’s epitaph, and it is found in the 1963 Bond novel On Her Majesty’s Secret Service as being the family motto of Sir Thomas Bond. James Bond sees that coat of arms in the novel.

The phrase was used for a film of that name, but the plot of the novel On Her Majesty’s Secret Service became a film of its own. Sean Connery retired from the 007 role after You Only Live Twice and George Lazenby became Bond for only this one film in the series.


Not all of the Bond films are derived from Fleming novels or the novels' titles. A View To A Kill comes from an a non-Bond Fleming short story called "From A View To a Kill" and doesn't really make much sense plot-wise as a title for that film.

The second of the two Timothy Dalton Bond films is License to Kill. Having run out of novels to use, the filmmakers took elements from  two Fleming short stories, a novel, and some Japanese Rōnin tales. The working title for the film was a much more accurate one: License Revoked. In the film, M  suspends Bond and therefore his "license to kill." But after testing the "revoked" title, American audiences associated it with losing a driver's license, so the filmmakers went with the ironic (or just inaccurate) License to Kill.

Another oddball title in the series is Quantum of Solace. This 2008 film is named for a Fleming short story. Though a "quantum" is the smallest possible amount of a physical property, a small amount of solace have no real meaning in the film.

One inside joke became a film title.

In Never Say Never Again (1983), Sean Connery returned to playing James Bond for the seventh time. It was 12 years after Diamonds Are Forever when he "retired" from playing 007, and the film's title is a reference to Connery saying that he would never play Bond again. Now 52 years old, the plot was adapted so that Connery would be an aging Bond brought back into action.

The plot is a second adaption of Fleming's Thunderball novel which had already been filmed in 1965 with Connery.

Email ThisBlogThis!Share to TwitterShare to FacebookShare to Pinterest
Labels: titles