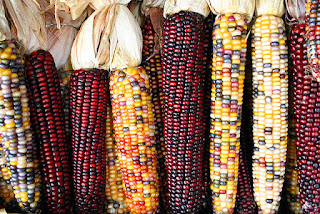 I always knew it as Indian corn, but this year I wondered if that was politically correct or even accurate.

It would more accurately be called flint corn (Zea mays var. indurata) and sometimes as calico corn. It is a variant of maize, the same species as common corn. For this variety, each kernel has a hard outer layer that is compared to flint.

Flint corn has become a symbol of harvest season and these multicolored ears often adorn doors and centerpieces.

Did you know that corn does not grow wild anywhere in the world? It is a domesticated plant that evolved sometime in the last 10,000 years. Its original form was teosinte, a form of wild Mexican grass.

Good old troublemaker Christopher Columbus brought corn to Europe in the late 1400s. The American Indians used it as a dietary staple and the colonists learned how to cultivate it from them.

The most commonly grown kind of corn in America is dent or field corn which is used to feed livestock, for the manufacture of industrial products and processed foods. It is a yellow or white corn and it is called dent for the indentation that appears on the outside of its mature kernels.

We eat sweet corn (also yellow and white), which can be cooked and eaten right on the cob, and is also sold canned or frozen. Like dent corn, its kernels are usually yellow or white.

Flint corn, or Indian corn, is one of the oldest varieties of corn and is white, blue and red. It has  very low water content and so it is more resistant to freezing than other vegetables. The kernels have a bit of soft starch surrounded by hard starch, so they dry and shrink uniformly and are less prone to spoiling. It is type of corn ideal for harvesty décor, but it is also consumed by livestock and for people it can be used for hominy and polenta.

Popcorn is Zea mays everta meaning "corn turned inside out" and is considered a variant of Indian corn.

And Indian corn is a historically accurate name.
Posted by Ken Ronkowitz at 03:00

Email ThisBlogThis!Share to TwitterShare to FacebookShare to Pinterest
Labels: plants