Have you noticed how may countries end with -stan? This suffix comes from the Proto-Indo-European language which was a prehistoric Eurasian language. Linguists have reconstructed it and find it in many language descendants.

In Russian -stan means “settlement.” In other Slavic languages it means “state.” But it is the ancient Indo-Iranian peoples (descendants of Proto-Indo-Europeans who moved east and south from the Eurasian steppe) who used -stan to mean “place” or “place of” that we find in the names of the modern countries.

Urdu and Pashto, the official languages of Pakistan and Afghanistan respectively, both descend from the Indo-Iranian language. Also the former Soviet -stan countries have historically been mostly ethnically Turkic and speak languages from the Turkic family. 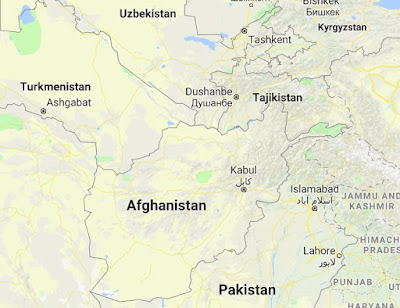 So, Afghanistan is the "Land of the Afghans.”

Kazakhstan is the “Land of the Kazakhs” and Kazakh is derived from a Turkic word meaning “independent.”

Kyrgyzstan being the “Land of the Kyrgyz” and Kyrgyz is thought to come from the Turkic word for “forty” being a reference to forty clans that banded together.

Though Pakistan - “Land of the Pure” in Urdu could come from the Indo-Iranian pak, word for “pure/clean”), the country’s name was constructed as an acronym in the 1930s. It referes to the area’s constituent cultures: Punjabi + Afghani + Kashmiri + Sindhi + Balochistan with an "i" inserted to aid pronunciation.

Tajik historically was used by Turks to refer to “non-Turks” that spoke Iranian-related languages, so Tajikistan is the "Land of the Tajiks.”

Turkmenistan is the “Land of the Turkmen.”

Uzbeki+stan rom Uzbek which either comes from Uzbek Khan, a tribal leader who united different groups in the region, or a combination of Turkic words meaning “his own master.”