A Ballcock Is Not an Obscenity

As I wrote in a short poem, this mechanism that is often found as part of toilet sounds obscene. It's not. At least it wasn't meant to be when it was invented by a priest.

A ballcock (also known as a balltap or float valve) is a mechanism or machine for filling water tanks, such as those found in flush toilets, while avoiding overflow.

The modern ballcock was invented by José Antonio de Alzate y Ramírez, a Mexican priest and scientist, who described the device in 1790 in the Gaceta de Literatura Méxicana. The ballcock device was patented in 1797 for use in steam engines by Edmund Cartwright. 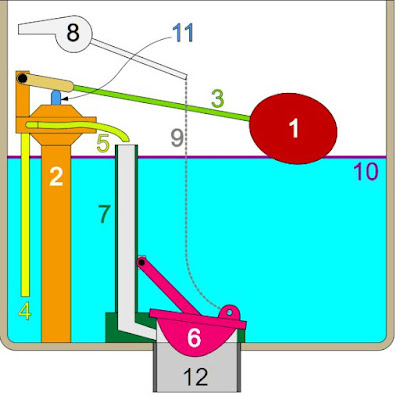 It consists of a valve (11) connected to a hollow sealed float (1) by means of a lever (3) mounted near the top of the tank. The float is often ball-shaped, hence the name ballcock. The valve is connected to the incoming water supply, and is opened and closed by the lever which has the float mounted on the end. When the water level rises, the float rises with it; once it rises to a pre-set level, the mechanism forces the lever to close the valve and shut off the water flow.

Cock valves (also known as plug valves, stop cocks, or quarter-turn valves) are devices that allow the user to restrict or permit flow through a pipe from an external point. Their use can be dated all the way into antiquity, and they are one of the simplest means of controlling fluid flow.

The word cock has many meanings beyond being a slang term for a penis. Going back to the 1500s, we find the term used as a noun and verb referring to a part of a gun and the action of putting into position the hammer by pulling back to the catch before firing.

A later usage is the term "to go off half-cocked" which figuratively means to speak or act too hastily. That usage alludes to the literal situation when firearms fire unexpectedly when supposedly secure. A weapon that is half-cocked has the cock lifted to the first catch, at which position the trigger does not act.

The male of the domestic fowl is called a cock (and more politely and euphemistically as a "rooster') and they have been associated since ancient times with male vigor. Cock is short for cockerel and a cockerel might be introduced to a group of hens (roost) to encourage egg laying. It is then called a rooster. Rooster is more common in American English and cockerel (cock) is British English. The connection to a human male penis is unclear. Ironically, the fowl known as the cock has no penis.

The  (the Latin word is penis). There are examples of efforts to avoid the older usages of "cock." As with "rooster," haystack replaced haycock, and weathervane replaced weather-cock. Author Louisa May Alcott's father was born Alcox, but changed his name.

The word is still used in other expletives such as cock-teaser and cock-sucker which appeared in print as far back as 1891.

A cocker spaniel was a dog breed trained to start woodcocks in the hunt.

"Cock of the walk" is a phrase used to describe an overbearing fellow, probably alluding to the "proud" walk of the rooster.

"Cock-and-bull" is used to label a fictitious story or exaggerated lie. It was first recorded in the 1620s and might be an allusion to the talking animals of Aesop's fables. French has parallel expression coq-à-l'âne.