Abracadabra is an incantation used, primarily in stage magic tricks for entertainment purposes.
But in its origin story was an ancient belief that the incantation had healing powers.

The word's origin is not clear, but it is often listed as Aramaic from a phrase meaning "I create as I speak." The etymology is not confirmed. Wikipedia says that the phrase in Aramaic אברא כדברא would be more accurately translated as "I create like the word."

The origin stories are numerous: an abbreviated forms of the Hebrew words for "father, son, holy spirit,"; a reference to Abraxas, a god worshiped in Alexandria in pre-Christian times.

The first known mention of the word was in the third century AD in a book called Liber Medicinalis  by Quintus Serenus Sammonicus, physician to the Roman emperor Caracalla. It was he who prescribed wearing an amulet containing the word written in the form of a triangle for several lethal diseases. 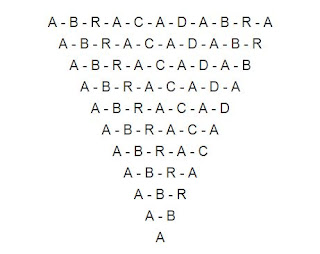 It was used by the Gnostics of the sect of Basilides, and is found on Abraxas stones, which were worn as amulets.

The Puritans dismissed the word as having any power, but some Londoners posted the word on their doorways to ward off sickness during the Great Plague of London.

English occultist Aleister Crowley believed it had power and used the spelling abrahadabra.

Today, it is best known as it is used by stage magicians when performing a trick. It is also common in the popular culture in comic books, games, music, film and television and literature.

J.K. Rowling said in a talk in 2004 that the incantation Avada Kedavra in her Harry Potter books (known as the "killing curse") "is the original of abracadabra, which means 'let the thing be destroyed.' Originally, it was used to cure illness and the 'thing' was the illness, but I decided to make it the 'thing' as in the person standing in front of me. I take a lot of liberties with things like that. I twist them round and make them mine."